London is Open for (Legal) Business – The New ‘Mega’ Court 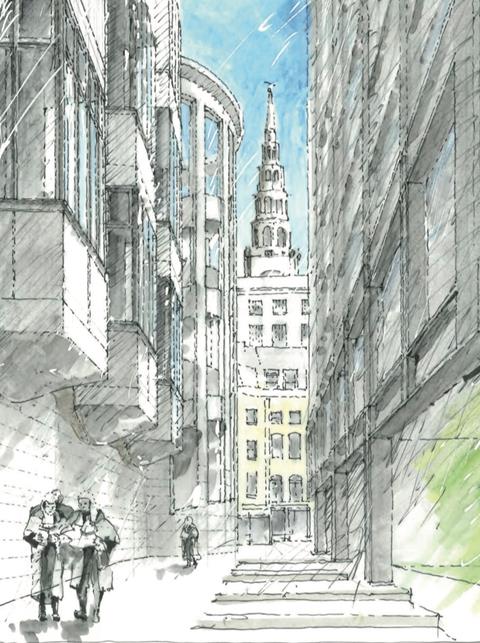 City of London have released further details regarding its plans to build a new central court complex in London, dubbed the ‘mega’ court. As the Square Mile works to restore the ‘buzz of the city’ through a wider regeneration scheme, these new exciting proposals reflect that London is indeed, open for business.

Three years after its announcement that a new central court would be constructed in London, City of London Corporation have outlined further proposals and design work, in collaboration with the team of award-winning Eric Parry Architects.

In October 2017, the City of London Corporation and HM Courts and Tribunals Service revealed that it intended to create a new multi-purpose, technologically-advanced court complex to replace all of the City of London’s courts, except the Central Criminal Court (Old Bailey). Dubbed the ‘mega’ court, the large-scale building intends to offer a refreshed, technologically advanced facility specialising in fraud, economic and cyber-crime.

Plans for the Court

The new court will involve a grand reconstruction of Salibsury Square and Fleetbank House on the south side of Fleet Street, redeveloping the 1960s Fleetbank House and a 1980s office building on Fleet Street itself. Eric Parry Architects has been selected to design the new courts complex in conjunction with specialist sub-consultants Raymond Smith Partnership and Feildon & Dawson Architects. 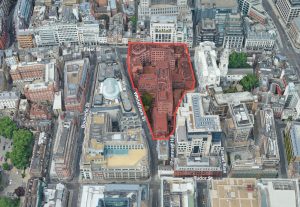 The project will result a new centre containing eighteen courtrooms and a state-of-the-art headquarters for the City of London Police, which is currently situated in the Guildhall. It therefore represents a groundbreaking opportunity to construct an environment that meets the needs of both the judiciary and the City of London Police. Moreover, it will reflect the commitment of the police and judiciary towards embracing smart working practices and technological advancements.

The City of London Corporation plans to lease the court site to the HM Courts and Tribunal Service for a ‘peppercorn rent’, according to the corporation.

Open For (Legal) Business: A Statement to the World

In an attempt to counter the move towards regionalisation, the City has placed a strong focus on the court’s location in Fleet Street to emphasise its proximity to London’s largest financial, technology and legal firms. The court centre is intended to specialise in fraud, economic and cyber-crime. Thus, its central location is ideal in supporting London’s reputation as a leading legal player in international dispute resolution. Policy Chairman at the City of London Corporation, Catherine McGuinness, explained “our legal system has been an example to the rest of the world. Playing host to some of the world’s leading regulators, financial services and tech firms, the City is a natural choice to house this modern judicial centre. This proposal will make sure London continues to set the highest legal standards domestically and internationally. Our rule of law is one of the many reasons why London is the number one financial centre in the world and this new court will add to our many existing strengths”.

Whilst there is no glaring or imminent need to upgrade the courts of London, the new multi-purpose high technology complex will reflect the values enshrined in the ‘London is Open’ campaign. Launched by the Mayor of London, Sadiq Khan, in 2016, ‘London is Open’ reinforced the message that London remained united, tolerant, entrepreneurial and international. Following a turbulent year involving the Brexit referendum, the campaign endeavoured to affirm England and London’s commitment to the rest of the world. It appears as though the spectacular New Year’s Eve fireworks display on the eve of 2017, finished with the poignant, evocative chime ‘London is open to the world’ was just the beginning. Post-Brexit and post-lockdown, in 2020, the City of London remains evermore willing to rejuvenate and internationalise the city and its court system.

Secretary of State for Foreign and Commonwealth Affairs, Dominic Raab, stated in 2017 that “this new flagship court will build on UK legal services’ unique comparative advantage by leading the drive to tackle fraud and crack down on cybercrime. By reinforcing the City’s world-leading reputation as the number one place to do business and resolve disputes, it’s a terrific advert for post-Brexit Britain.” 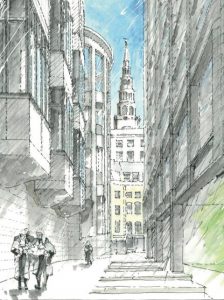 The Future of the ‘Mega’ Court

The release of further details for the court displays the continued desire of the City of London to revitalise the legal system. In a time of confusion, virtual court hearings and uncertainty, a gleaming new multi-facility court and auxiliary renovation of Fleet Street will be warmly welcomed. It is almost certain that this project will symbolise a beacon of light for the City of London, its historic legal system and its future international promise.