How is the law combatting “Fake News”?

The Trump Impeachment: A brief summary 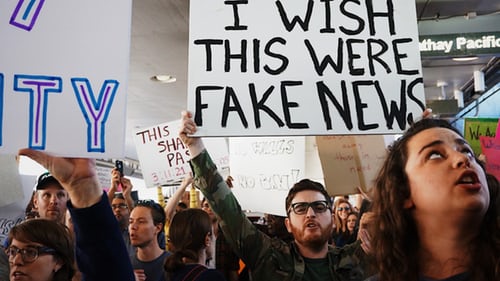 With the rise of social media platforms, fake news feels like a new phenomenon. It has, however, existed for centuries. Back in the first century BC, the first emperor of the Roman Empire Augustus – then known as Octavian – used fake news to discredit his political rival Mark Antony. Needless to say, that the invention of the printing press in Europe by Johannes Guttenberg in 1439 was not instantly accompanied by a handbook of publishers’ and editors’ ethics. By the mid 1890’s the birth of “Yellow press” in America arrived which was the forefather of tabloid news. This journalism was sensationalist and had a distinct lack of care for the truth.

Fast-forward to the 21st century and the internet made sensationalism even more prevalent. Unfiltered social media platforms have made it increasingly difficult to tell what it true and what is not. Therefore, people have become more responsive and more easily manipulated by an unfiltered stream of news on search engines and social media platforms like Facebook and Twitter.

In this article The Student Lawyer looks at the legislation that is trying to combat these problems and whether this has been successful in making search engines and social media platforms accountable for spreading fake news. 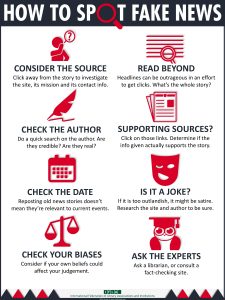 Some advice on how to spot fake news, published by the International Federation of Library Association and Institutions (IFLA)

The authority who scrutinises compliance of this law is the CSA (French Broadcasting Agency).

On January 1st 2018, Germany’s Network Enforcement Act, otherwise known as NetzDG, came into force. It targets hate speech on social media by making social network companies liable for fines up to 50 million euros if they do not remove illegal content within 24 hours. The law considers unlawful content as:

In May 2019, Singapore passed the Protection from Online Falsehoods and Manipulation bill (POFMA), which allows the government to:

However, government monitoring of fake news goes further than just public posts on social media platforms such as Facebook and Twitter. The new laws are applicable to private groups, private chats and texts. The government has not explained how they will gain access to these messages, but the law will make Singaporeans think twice when chatting to their friends on WhatsApp as well when posting publicly on a social network. Naturally this has seen some backlash as the state will decide what is fake news or not and has far-reaching powers that could be used to censor citizen’s legitimate opinions.

In March 2019 Russia’s President Vladimir Putin passed two bills the ban “blatant disrespect” of the state and prohibit the sharing of “false information of public interest, shared under the guise of fake news”. Content that is considered to be causing “blatant disrespect” to the state or offends “public morality” must be removed within 24 hours. The penalties are:

Many have seen this legislation as part of an attempt to create a “Sovereign Internet”, whereby the Russian state will have complete wide-reaching control of its citizens online freedom.

Following the anger by many at Facebook’s slowness in removing a video where a gunman killed 50 people in two mosques in Christchurch (New Zealand), Australia introduced new legislation to tackle the malicious use of online media. It was justified as a process of making social media just as liable as mainstream media companies for the material broadcasted. The bill introduced:

In 2018 the former Malaysian Prime Minister Najib Razak passed the Anti-Fake News bill just days before parliament was dissolved for an election campaign. The bill meant that reporting “wholly or partly false” news could lead to:

Many felt that the bill was a last-ditch attempt to salvage an electoral victory by the former Prime Minister Najib Razak. Malaysia’s new Prime Minister Mahathir Mohamad, who is 93 years-old, immediately set about repealing the law in the name of freedom of speech. Eventually on 9th October 2019 he succeeded, whilst his former political opponent Razak is currently struggling with allegations of corruption linked to the multibillion-dollar scandal at state fund 1 Malaysia Berhad (Malaysia’s state investment fund). Matathir himself has been accused of spreading fake news and was one of the first to be investigated under the recently abolished law. Hence fake news remains a controversial topic in Malaysia.

In the build-up to the European elections, Twitter felt that the French Government had flaunted their very own fake news laws and removed a government advert that encouraged people to vote in the elections. Following the instigation of France’s new laws on fake news, Twitter changed its policy which prevented political campaign adverts.

This meant that the French Government’s #OuiJeVote campaign was outlawed. Outraged, prominent French government figures took to Twitter: MP Naima Moutchou tweeted “I thought it was an April fools” and the Interior Minister Christophe Castanter tweeted “Twitter’s priority should be to fight content that glorifies terrorism. Not campaigns to register on the electoral lists of a democratic republic”. In May a claim was brought against Twitter by Ms Marie-Pierre Vieu (a MEP running for re-election) and Mr. Pierre Ouzoulias (a French Senator). However, this was dismissed by the Paris Civil Court.

Later Twitter tweaked their policy to allow adverts that encourage political participation. They explained in a statement: “Following the legislation on information manipulation, we decided to ban any targeted advertising in France, including campaigns calling people to vote. After a lot of exchanges, we have decided to allow ads encouraging electoral participation”.

It is clear that fake news laws are hard to implement and damaging to democracy and free speech when abused by the state. In Singapore, Malaysia and Russia may feel that the laws are either too intrusive or akin to censorship, rather than protecting and enhancing democracy. In France and Germany there are similar concerns, but what has been highlighted is the difficulty of quickly and effectively removing content. Typically, social media platforms will either maintain liberal policies and run the high risk of missing fake news or they will impose blanket policies that are arguably too constrained as the case above demonstrates.

Nevertheless, it has become clear that social media platforms must be better regulated in the future and its users better educated and prepared for its content. Furthermore, many countries consider the same issue from different angles, for example Australia focuses on violent content, whilst France focuses on misinformation around electoral campaigns. A more cohesive legal response is necessary to fully tackle the issue, since the internet does not have the same borders as the law. Whether the European Union and others can begin to form such a response on the issue remains to be seen.