How to Get a Law Training Contract in Finance 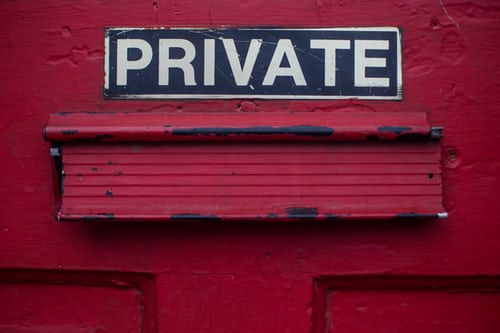 Many doctrines under English law form due to common law, also known as judge-made or case law, where a series of legal cases create and form doctrines or principles which underpin legal rights. Privacy emerged as a notion in common law in the 18th century, developing through cases, until it was legislated in the 20th century under the European Convention on Human Rights, which was integrated into English law by the Human Rights Act 1998. In Part I of this introduction to privacy, we explore the early common law cases which introduced the concept of privacy to English law.

The concept of privacy was first referred to in the context of a person’s right to not have their activities in the home imposed upon by the state or others:

“The house of every one is his castle and fortress, as well for his defences against injury and violence, as for his repose…” – at p.1 Peter Semayne v Richard Gresham 77 ER 194

This approach was affirmed in the case of Entick v Carrington [1765] EWHC KB J98, in which individuals broke into Carrington’s house and conducted an invasive search of the premises, including all his correspondence, pursuant to a warrant for finding libellous material. Finding in favour of Carrington the Court stated that such an action by the State was a gross infringement of his rights:

“The warrant is to seize all the plaintiff’s books and papers without exception, and carry them before Lord Halifax; what? Has a Secretary of State a right to see all a man’s private letters of correspondence, family concerns, trade and business? This would be monstrous indeed; and if it were lawful, no man could endure to live in this country.” – at p.2

The conceptualisation of privacy in early common law judgments

In the 19th century, the concept of privacy as a value underpinning decisions in English cases was conceptualised and extended further. The case of Prince Albert v Strange (1849) 41 ER 1171concerned the application for an injunction to prevent the publication of a catalogue of etchings and analyse them. The catalogue was not intended to be made public. Making the catalogue public, and critiquing the ideas of the creator they presented was seen to engage the right of privacy:

“That there is property in the ideas which pass in a man’s mind is consistent with all the authorities in English law. Incidental to that right is the right of deciding when and how they shall first be made known to the public. Privacy is a part, and an essential part, of this species of property.”

This early formulation of privacy is based upon the premise that it is a concept which attaches to property, in this case, ideas. It is then engaged as a matter of autonomy, in the prevention of or control of that property. However, in finding that the publication of the catalogue should be restrained by an injunction the Court was not particularly consistent in its reasoning:

“In the present case, where the privacy is the right invaded, the postponing of the injunction would be equivalent to denying it altogether. The interposition of this Court in these cases does not depend on any legal right; and, to be effectual, it must be immediate.”

As above the Court referred to “privacy as the right invaded”, characterising it as a standalone right capable of meriting legal protection, as well as a notion or value underpinning its decision. This distinction is crucial and has been much debated, as it raises the question of whether, absent any other right meriting legal protection, an individual’s right to privacy in and of itself can be the basis for legal action.

The formation of actions which provide ancillary protection to privacy

This difficulty with conceptualising privacy, the legal status it carries and its consistent application to cases continued. As a result, a number of causes of action emerged which could be utilised to protect privacy as an ancillary right. Such cases became illustrative of the need to clarify the legal status of privacy under English law.

The seminal case of Coco v A.N. Clark (Engineers) Ltd [1968] FSR 415 provides an example of such a case. The case refined the principles of the breach of confidence action, one of the primary causes of action which can operate to protect the privacy rights of individuals. The action is permissible where confidential information, which was communicated in a manner importing an obligation of confidence and is used in an unauthorised manner. Crucially, the principles set out in Cocoallow for the protection of an individuals privacy where a pre-existing confidential relationship can be established. However, this contextual protection of privacy left a lacuna which needs to be addressed- what if an individual wishes to protect their privacy absent an associated cause of action? What if the pre-existing cause of action relied upon is ill-fitted to the facts of a particular case?

Kaye v Robertson [1990] EWCA Civ 21 acknowledged this incidental approach and the need for Parliamentary guidance on the issue. In Kaye, a prominent actor was hospitalised following an accident, a matter which caught the attention of a number of news outlets. One journalist for the Sunday Sport, ignoring notices and cautions, entered the hospital where Mr Kaye was recovering, interviewed and took pictures of him purportedly with his consent. When the Sunday Sport looked to publish the interview and a number of photos which had been taken Mr Kaye applied to the Court for an injunction to prevent their publication.

Such cases could be characterised as pseudo-privacy cases- in using a cause of action which was developed to protect another right, their reputation or goodwill, for example, a claimant’s privacy is vindicated:

“It is well-known that in English law there is no right to privacy, and accordingly there is no right of action for breach of a person’s privacy. The facts of the present case are a graphic illustration of the desirability of Parliament considering whether and in what circumstances statutory provision can be made to protect the privacy of individuals.

In the absence of such a right, the plaintiff’s advisers have sought to base their claim to injunctions upon other well- established rights of action. These are:

R v Director of Serious Fraud Office, ex parte Smith [1993] AC 1 provides an earlier case study in balancing an individual’s privacy, which was seen as inextricably connected to the concept of liberty, with other fundamental rights. This approach acknowledges that there are situations in which an individual’s liberty, and therefore, privacy may justifiably be curtailed. This balancing of interests would become a key feature in later privacy cases, particularly involving the press’s publication of personal information:

“[It] is a simple reflection of the common view that one person should so far as possible be entitled to tell another person to mind his own business. All civilised states recognise this assertion of personal liberty and privacy. Equally, although there may be pronounced disagreements between states, and between individual citizens within states, about where the line should be drawn, few would dispute that some curtailment of the liberty is indispensable to the stability of society…”

This balancing exercise raises more questions than it solves (arguably even to this day). The finer points of what information attracts a greater degree of privacy, public interest and how these interests are balanced against each other is still not fully, or sufficently, defined for consistent application to cases.

What is clear from the historic authorities is that defining privacy and distilling its application under English law was not so simple. Whether arising as a standalone legal right, incidentally to the application of another right or as a value underpinning judicial decision making it was clear that there was a great need for clarity around the status of privacy to vindicate those seeking to protect it and manage competing rights.

This article is the first in a three part series on privacy law.  Parts 2 is available here and Part 3 will be published in the coming weeks.