An Introduction to International Jurisdictional Structures

4 Things to Look for in a Prospective Law Firm 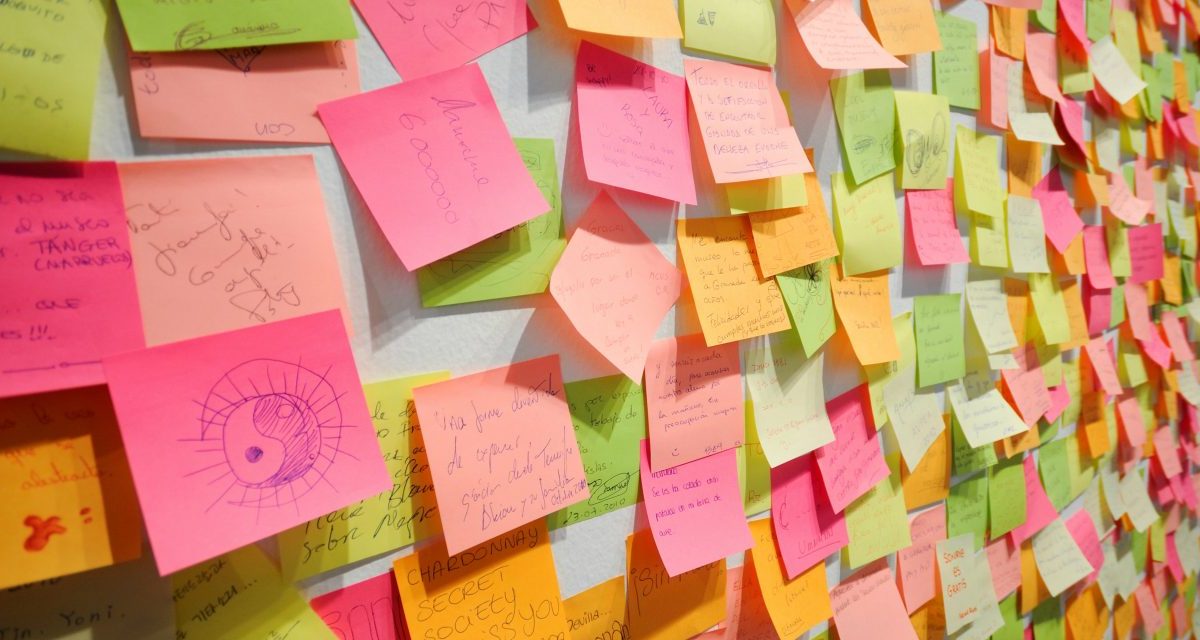 First of all, it goes without saying that the Jurisdictional Organization of each country has its own way of doing legislate things.

This adds an additional and difficult task for people who are interested in law to know how it is organized differently in each state worldwide.

At all events, it’s important to notice that the application of Union law doesn’t only fall within the jurisdiction of the European Union. Namely, Courts and tribunals of the Member States must also apply this law.

In other words, the courts of the European Union and the Member States collaborate to ensure the correct and uniform application and interpretation of laws throughout the world.

In order to know how the law works in a State, it is best to understand according to diagrams that highlight each institution by representing their scale of practice. 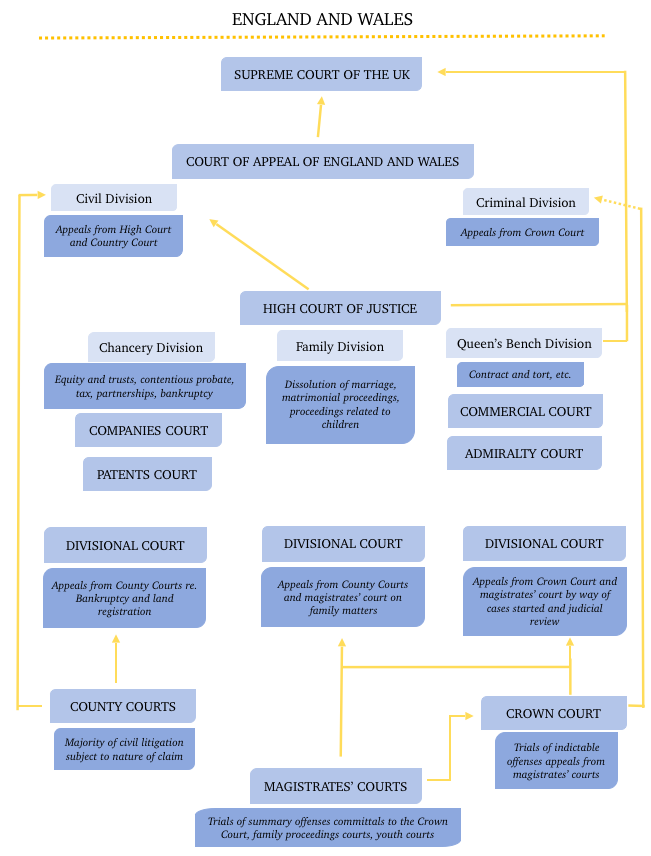 English law is at the origin of the common law in many countries. It differs from civil law or mixed systems in other countries, such as Scotland.

The common law is a system whose rules are essentially made up of judges sitting in the courts.

In fact, they assess the facts presented to them in the light of their reason and their knowledge of legal precedents.

All courts must respect a decision made by the higher courts and apply it in turn.

The law of Northern Ireland is based mainly on English common law, but with differences arising from the period of Northern Irish autonomy.

Actually, the criminal justice system was completely overhauled after the signing of the Belfast Agreement. Indeed, the United Kingdom Government then introduced the Justice (Northern Ireland) Act.

Scotland has a mixed legal system, unique in Europe, based on the dual basis of Romano-civil law in line with the Justinian Code and recent common law (after the union).

The Scottish system is comparable, in particular, to South African law. Scottish law differs from English and Northern Irish law in the areas of property, criminal law, succession, and family law.

Moreover, a jury may make a verdict of guilt or acquittal, but the latter could be qualified: either not guilty or “not proven.” 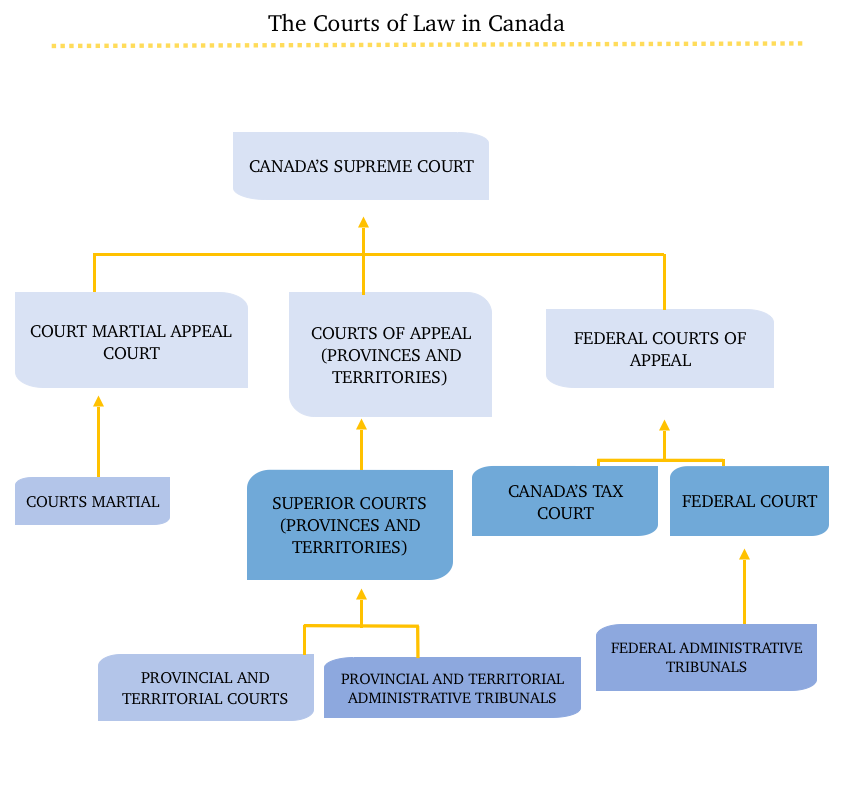 In addition to the courts of national jurisdiction, each province and territory has its own courts. The Supreme Court of Canada oversees this whole system.

The primary role of the courts is to administer justice. That is to say ensuring that disputes are resolved and crimes are prosecuted fairly in accordance with Canada’s legal and constitutional structure.

The Constitution of Canada gives the federal government exclusive authority over criminal and public law.

To clarify, the provinces are given jurisdiction in civil law matters and are responsible for the administration of justice in their jurisdiction.

At first sight, a pyramidal organization is preferred for courts that have power over Quebec law. It is important to know that in Canada, there is no division of the judicial system.

With few exceptions, the courts may hear appeals based on provincial law, federal law, appeals in civil, criminal and also constitutional law. As a matter of fact, courts are organized in a fairly unitary manner.

The Parliament of Quebec is responsible for the administration of Quebec courts.

On top of that, this rather unique distribution in court management stems from the fact that the Superior Court and the Court of Appeal of Quebec were created before the British North America Act of 1867. However, the provinces administer justice in their territories.

Depending on the amount in dispute and the type of remedy, the court of first instance may vary. Then, the decision could be appealed, as the case may be, to the Quebec Court of Appeal and finally, if the case is of great importance, to the Supreme Court of Canada.

However, the organisation of French courts is based on several principles that guarantee respect for fundamental freedoms, divided into two orders: a judicial order and an administrative order. 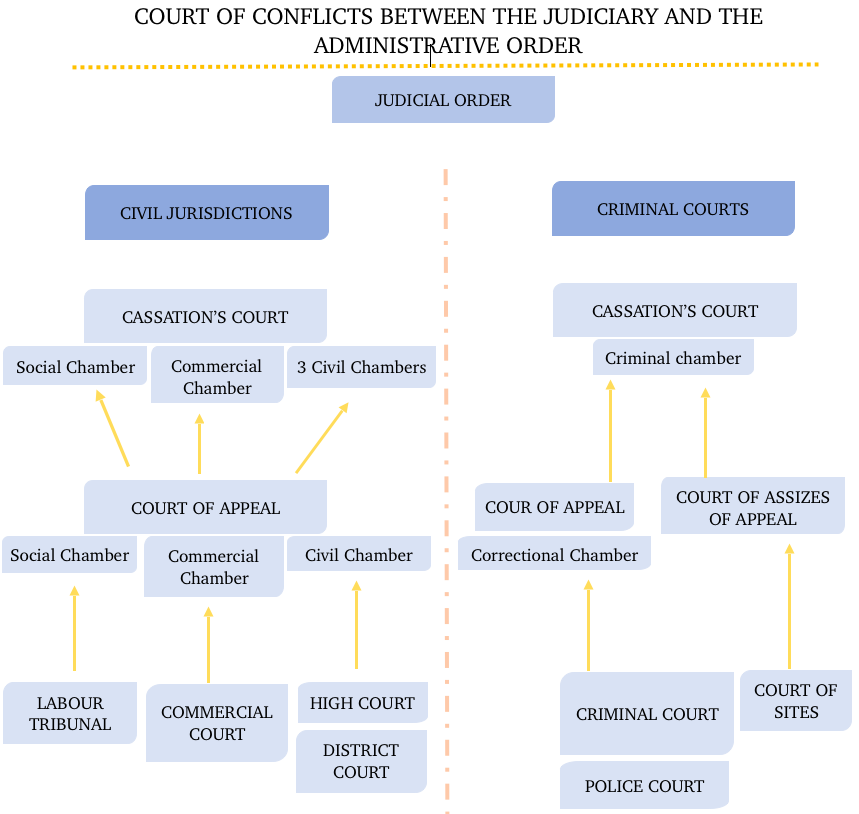 As a result, the courts of the judiciary are competent to settle disputes between private persons and to punish those who violate criminal laws. 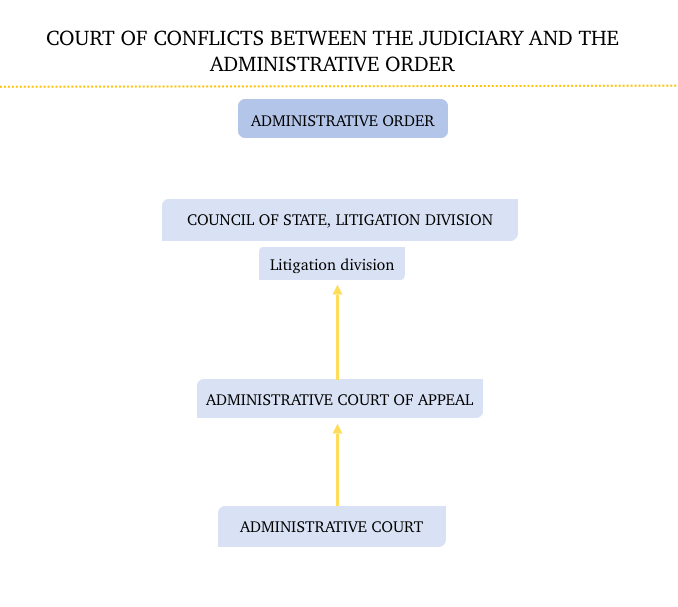 As a matter of fact, administrative courts have jurisdiction as soon as a public person is involved.

To ensure this separation, the Conflict Tribunal has been established. It resolves conflicts of jurisdiction between administrative and judicial courts.

Due to Germany’s federal organization, the judicial system also has a federal structure.

The German judicial system is divided into five independent branches or specialized courts.

Consequently, jurisdiction is exercised by the federal courts and the courts of the sixteen federal states (Länder). The latter is responsible for most of the burden of administering justice. 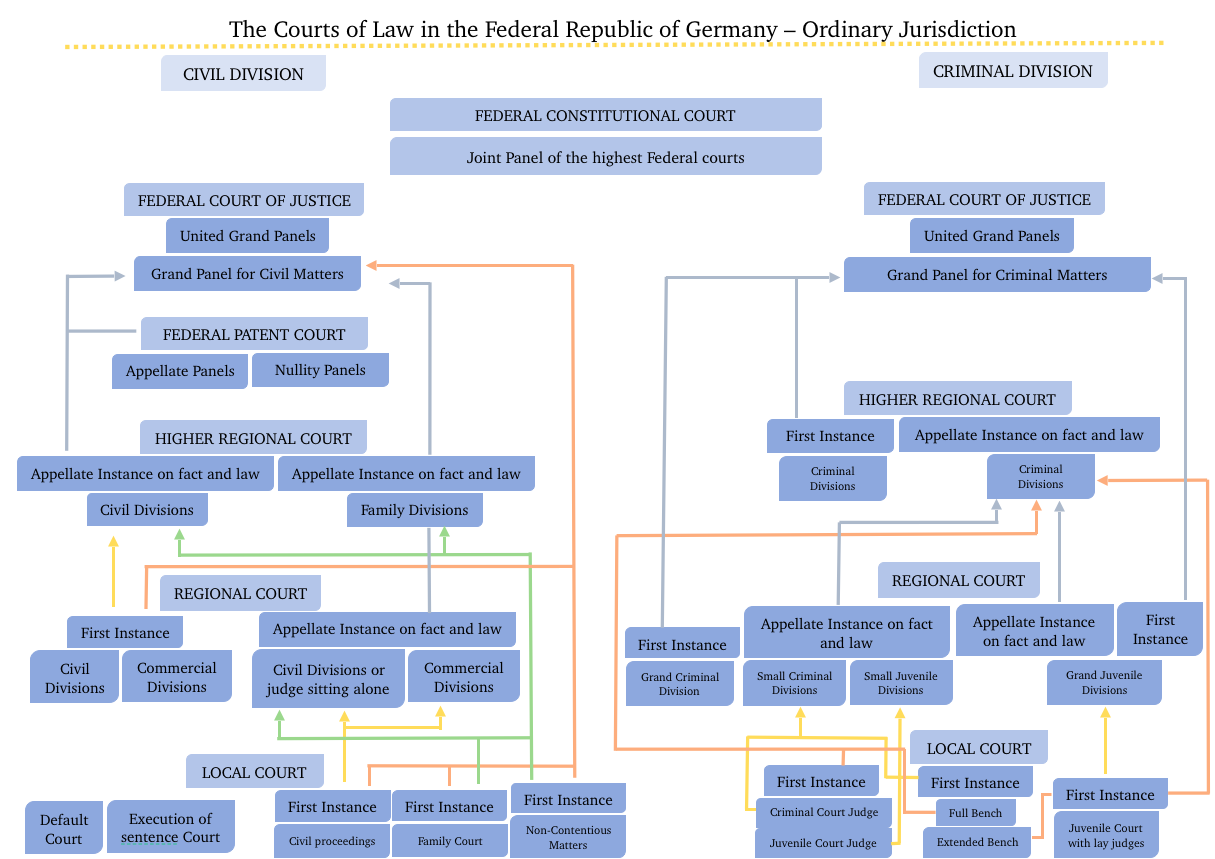 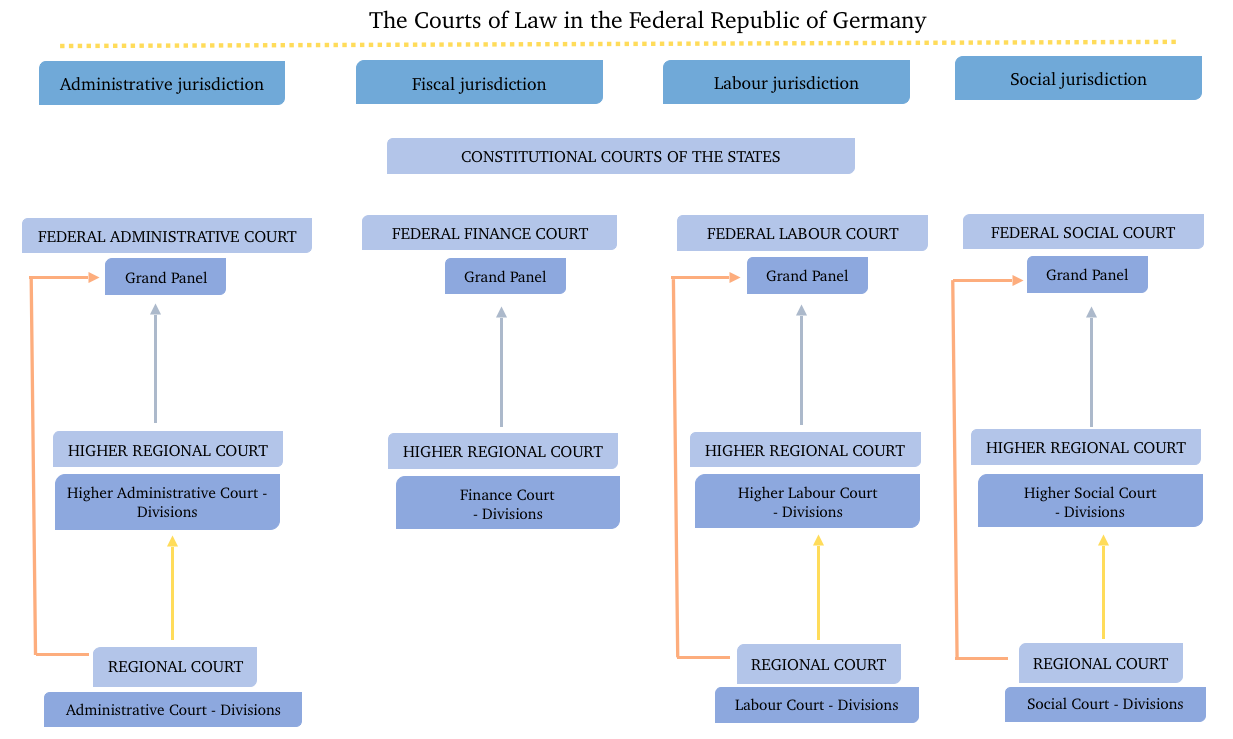 The United States is a federal system, with a central federal government and individual governments for each of the fifty states.

As with other branches of government, on the other hand, each state has its own comprehensive judicial system (state courts) as does the United States itself (federal courts).

Furthermore, in the United States, there is a jurisdictional organization specific to each state as well as a federal jurisdiction managed by the federal government. 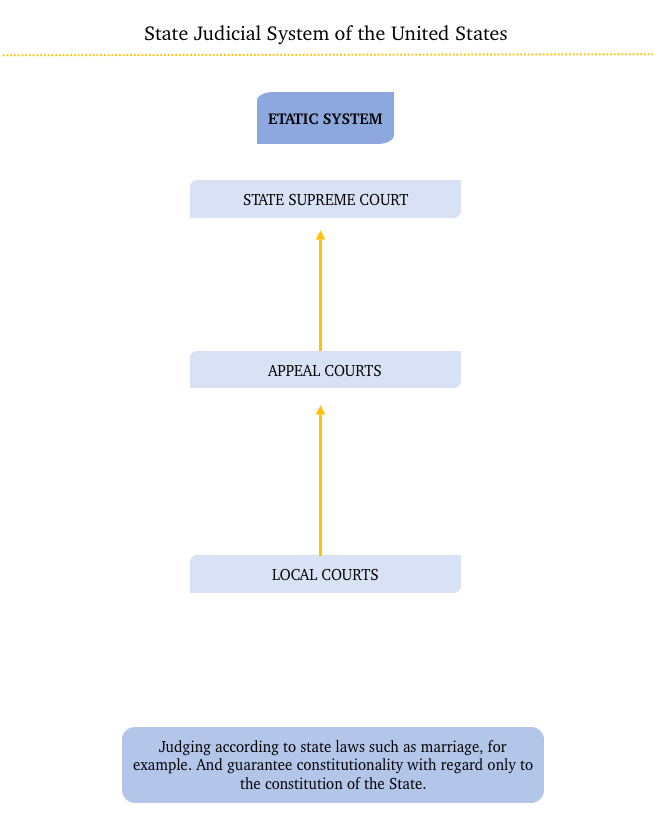 Similarly, at the level of each State, the pyramidal structure exists. For local courts at the county, city, commune and village level, magistrates are civil servants with delegated judicial competence under current local law. 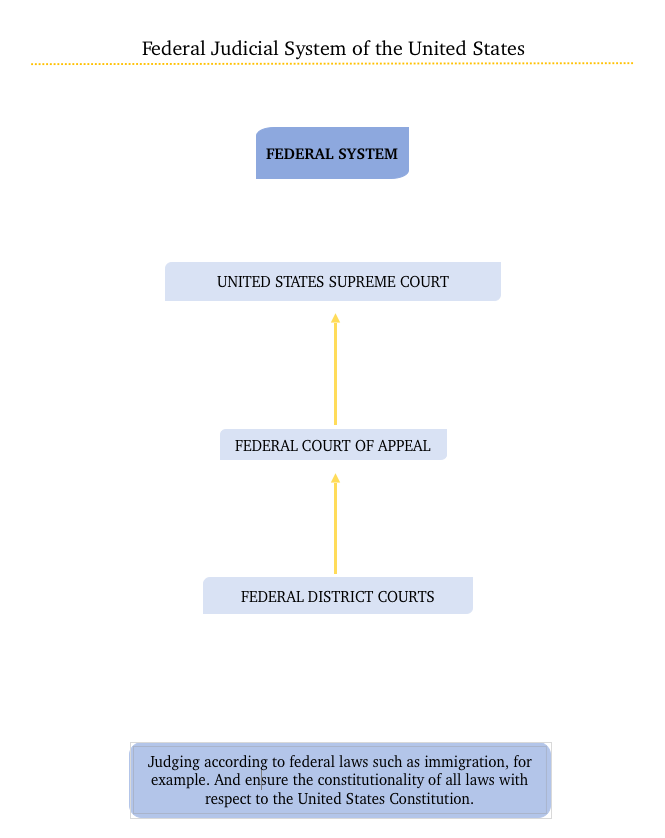