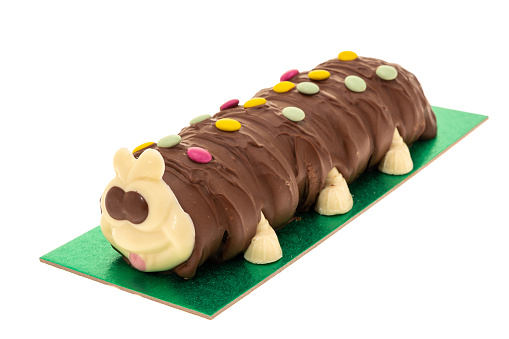 In this article, Zara Yusuf discusses the legal claim of Colin v Cuthbert.

The British birthday cake staple has recently become the subject of a legal battle, with Marks and Spencer (M&S) lodging an intellectual property claim at the High Court against Aldi. With regards to Colin and his female counterpart Connie the Caterpillar cake, M&S holds three registered trademarks. M&S argues that Aldi has breached its intellectual property rights, with its own Cuthbert the Caterpillar cake infringing their trademarks for Colin the Caterpillar. This article will provide an overview of the case so far.

Marks and Spencer’s iconic Colin the Caterpillar cake emerged from his cocoon over 30 years ago and since then, more than 15 million M&S caterpillar cakes have been sold. Aldi only began selling Cuthbert in 2019, with the competitor selling Cuthbert for around £4.99, compared to M&S’ price of around £7. A spokesperson for M&S said, “We want to protect Colin, Connie, and our reputation for freshness, quality, innovation, and value.” M&S is seeking to ensure that Aldi removes Cuthbert from their selves and refrains from selling similar products again.

Notably, the popularity of Colin has resulted in other supermarket chains releasing their own caterpillar cakes, including Tesco’s Curly, Morrison’s Morris, Waitrose’s Cecil, Co-op’s Charlie, Asda’s Clyde, and Sainsbury’s Wiggles. All of these are also chocolate Caterpillar-shaped cakes, all bearing resemblance to Colin and his packaging, save for some slight facial differences and changes to the decoration. However, M&S has only lodged an intellectual property claim against Aldi, which perhaps insinuates that they do not view the other caterpillar cakes to be infringing their trademark rights. Or maybe M&S will issue other legal proceedings against these other brands if they are successful in this case. As a more expensive supermarket, M&S may feel threatened by the success of Aldi, especially during challenging times and while M&S has not been enjoying a profit. Therefore M&S is likely to be more protective of their star product.

Historically, trademark cases that are based on the shapes and designs of products have been challenging to prove. Nestle could not protect the shape of their four-fingered KitKat biscuit bar, in a case heard by the European Court of Justice in 2018, although Toblerone successfully defended their triangle-shaped chocolate. Another example is the European Court of Justice ruling in 2012 that the gold-foil-wrapped chocolate bunnies crafted by Lindt & Sprüngli ‘had no distinctive character’. Also, as can be expected from Aldi’s business model that is centred on providing cheaper alternatives to popular products, this is not the first time that Aldi has faced intellectual property litigation. In 2019, Aldi was found to have infringed the copyright trademarks of Charlotte Tilbury, when selling a £5 powder compact that looked very similar to the £49 compact sold by Charlotte Tilbury. Although the case of Islestarr Holdings Ltd vs Aldi Stores Ltd (the owners of the Charlotte Tilbury brand) centred around copyright infringement, rather than trademark infringement, it still serves as an example of the limits of Aldi’s business model, along with the fine line between producing lookalike products and infringing intellectual property rights. With Aldi’s business model being very well known, perhaps this will protect the supermarket in this case, as consumers are aware that it is a lookalike product and therefore it does not cause any confusion. As part of building its case, M&S will need to establish either a degree of confusion between Colin and Cuthbert or, alternatively, that Cuthbert is either taking advantage of Colin’s reputation or damaging it.

The Role of Social Media

The dispute has caused a stir on social media, with #SaveColin and #FreeCuthbert trending on Twitter. Support from loyal caterpillar cake customers and other supermarkets has poured in, with many poking fun at the case. Perhaps this is the result of a clever PR approach from Aldi’s savvy social media team, who may want to portray M&S as a miserable supermarket intent on removing competition, therefore diminishing M&S’ case against Aldi. Aldi’s social team even announced that they were bringing a limited-edition Cuthbert back to the supermarket’s shelves, with all profits to be donated to cancer charities. Moreover, in another Tweet, Aldi invited M&S to join in this initiative and stated that the cancer charities include the M&S partners Macmillan Cancer Support, before saying “Let’s raise money for charity, not lawyers #caterpillarsforcancer.” This seems like a difficult PR situation for M&S to wriggle out of. It also presents M&S with the challenge of carefully balancing both s marketing and PR objectives, along with the legal battle against Aldi, so that they are still favoured by their customers and secure an advantageous case outcome. It will be interesting to see how the case unfolds and the events show far highlight the power of social media and good marketing.

Ultimately, the question before the High Court is whether the similarities between Colin and Cuthbert could confuse the average consumer and whether Aldi is attempting to profit commercially by bringing a confusingly similar product to the market.

M&S will need to prove this to the court by showing the similarities between Colin and Cuthbert, with reference to the designs, packaging, and the face of the caterpillars. Also, M&S will probably try to highlight how Cuthbert is more similar to Colin, in comparison to the caterpillar cakes sold at the other supermarkets. M&S will likely utilise their trademarks to demonstrate that Aldi are committing trademark infringement, by using a similar mark which then confuses the consumers. Moreover, M&S may argue that by extension of Aldi using a similar mark, Aldi takes unfair advantage of, or harms, the distinct character of their registered trademarks. Perhaps M&S will need to demonstrate the point by showing any losses of sales since the emergence of Cuthbert, which would show that consumers have opted for Cuthbert instead of Colin, potentially caused by confusion.

Moving forward, it will be interesting to see how both Aldi and M&S wriggle out and advocate their cases.