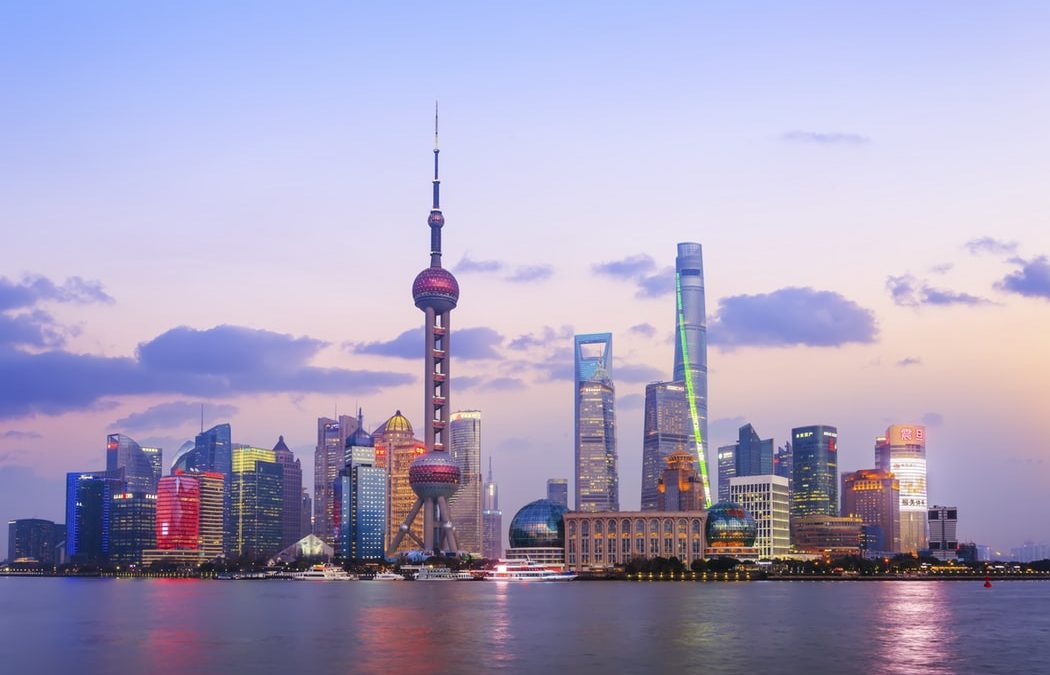 My name is Nichol and this summer, I was lucky enough to complete a CRCC Asia British Council Generation UK Internship in Shanghai, China. It has been over a year since I graduated from the University of Edinburgh with a degree in French & History and I plan on pursuing a career in Law in the future. Though I had already spent a year abroad in Lyon, France studying at university as part of my degree, I could speak French and it was only a train away! What I learnt was that international experience was both enjoyable and educational in so many ways and I really loved experiencing a new culture. So, as a graduate, I decided that I wanted to challenge myself even more by going to work further afield.

My name is Kirsten and in July, I had the incredible opportunity to experience working life interning in Beijing. By studying Politics and International Relations at the University of Manchester as well as looking to pursue a career in law following university, I was able to combine my passion for understanding the wider world, travelling and exploring different cultures with further insight into the legal sector. Whilst I have encountered what life abroad is like, having grown up in Dubai, I was keen to experience what working life would be like amongst a culture that was so stark and different to what I have previously experienced.

We were both extremely fortunate to have had the chance to intern in China’s two most influential and important cities who both play an essential role, not only domestically in the growth and development of China, but also on the international stage in cementing China’s position as a rising powerhouse. For this reason, we were keen to learn about each other’s experience in a different host city; so, we established a few key questions around which we could provide informative answers. If you are curious about international legal experience, have a read!

Where did you end up working in China?

Kirsten: With a 23-year history consisting of 54 offices, 15000 clients and 3500 lawyers, Jingsh Law Firm is the single largest law firm in the world advising clients with their expansive expertise in areas such as securities and capital markets, corporate business, real estate, foreign acquisitions and media and entertainment. This being said, I had the privilege of working amongst the Intellectual Property team at the Jingsh Law Firm headquarters in Beijing from 1st-19thJuly 2019. 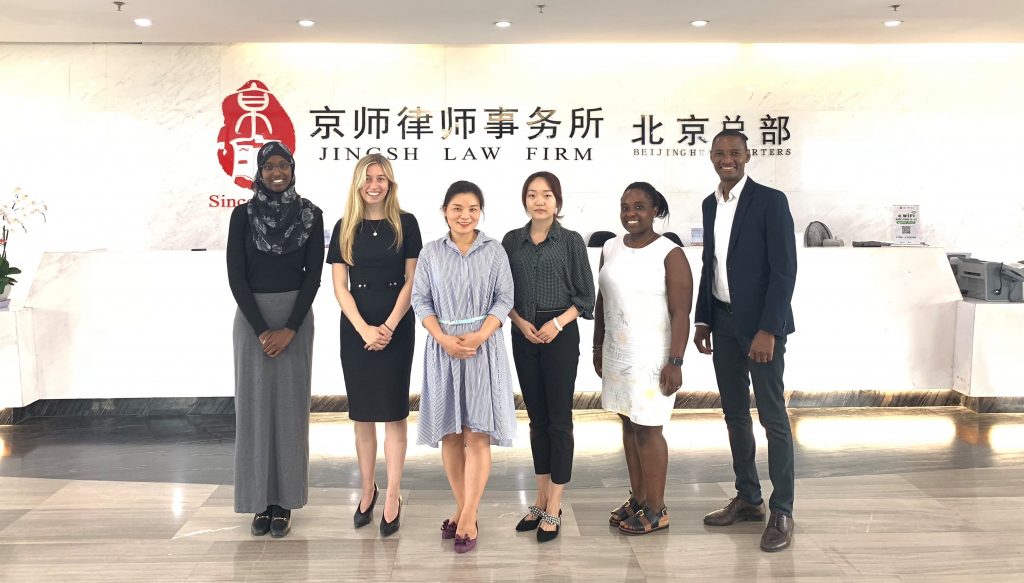 Kirsten at the Jingsh office in Beijing.

What did you do and what skills did you develop? What other opportunities did you have?

Nichol: I have always been told that language skills are an asset in the legal world; however, little did I know that my French & History degree would be of relevance to me in China. As my supervisor was Canadian, I had the opportunity to engage with Canadian Law. Not only did I get the chance to decipher the workings of a federal legal system, in particular, I was able to employ my language skills in drafting and translating legal documents for use in the state of Québec. Interning in a Chinese legal environment really cemented the reality of an increasingly global world; it soon became apparent that in order to thrive, international experience is vital. I was responsible for conducting legal research in various international jurisdictions which allowed me to learn about the differences in how the law is applied through differing legal systems. In order to further maximise my experience, I attended seminars on ‘Offshore Taxation Models’ and also participated in webinars such as ‘False Claims in US Healthcare Litigation’ (hosted by Norton Rose Fulbright). These experiences helped me understand how worldwide regulatory bodies manage the practice of law by enforcing both preventive and punitive measures.

Kirsten: During my work experience, I completed work including Article of Association reviews, research on the Belt and Road Initiative in Dubai and the benefits for both the People’s Republic of China and the Emirate, multiple excel spreadsheets containing research on the impact of Chinese companies’ investments, trademarks and patents in countries including Georgia, Canada, Russia, Spain and Ukraine and research on the process of owning a foreign owned company in Dubai.  What I found invaluable during my time at Jingsh was the fact that having been brought up in Dubai, coupled with my degree in Politics and International Relations, I was able to develop a better understanding of not only China’s involvement in a city where I grew up, but also more broadly on the international stage. In addition to gaining international experience in the legal sector, I also set myself the target of further developing my self-confidence, IT skills and leadership skills. I was able to consolidate these skills through the exposure of working at Jingsh, whilst also enhancing my organisational skills, teamwork and cultural awareness skills and building global connections.

What differences did you notice between China and the UK, both in terms of the Legal System and Culture? Are there notable differences between Shanghai and Beijing too?

Nichol: Aside from the obvious differences in law, I was also exposed to cultural differences. For example, I felt it necessary to be more reserved when sharing my opinions with senior members of staff; respect and standing is very important in China and I wanted to make sure that I was continuously mindful of this. Chinese lawyers also tended to have a midday nap (!) at their desk, which for me seemed slightly bizarre…but that’s culture for you.You could not talk about culture without mentioning language and indeed, we attended weekly Mandarin classes as part of the Generation UK Programme. Despite being a linguist, it was hardly a walk in the park, but it helped to be able to recognise numbers and key phrases in day-to-day interactions. Natives definitely appreciated if you made any effort; being able to say please and thank you would go a long way.

Needless to say, the opportunities were ample; if you were willing to put the effort in, you would be guaranteed a unique and insightful internship. For example, in light of the recent Trade Wars between the US and China, I was particularly interested in learning more about the perceptions of Intellectual Property (IP) as a concept in the Chinese business world. As a result, I attended an IP Seminar (hosted by King, Wood & Mallesons) and discovered that the biggest mistake in China with respect to IP related to the late or incorrect filing of trademarks. China is a first-to-file jurisdiction and so speed is of the essence. Something significant that was also flagged was the need to strengthen one’s brand by filing with a Chinese name too; not only is this a protective measure but necessary to capture a wide range of consumers and/or potential counterfeiters. This is where the importance of interning abroad really exhibited itself. It is one thing to talk about globalisation and cultural awareness as a concept, but by actively immersing myself in a world so traditionally removed from my own, only then was I able to fully appreciate how law and business manifest differently in relation to their cultural surroundings.

Kirsten: Whilst many assume that experience in the legal sector may be monotonous and similar wherever in the globe you work, I was surprised to find that there are some key differences in the genetic make-up of the Chinese and UK legal systems but also in the way that they function. Unlike the Western legal systems, traditional Chinese law has specifically focused on state concerns and dealt with private matters on an incidental basis with China adopting the German legal code rather than the UK’s mainly due to its compatibility with its vast size and bureaucratic traditions. With a socialist legal system, China’s desire for military survival and subsequently supporting an empire exposes the rationale for this form of legal system with the significant influence of Confucian values on traditional Chinese legal jargon reflected in the antipathy towards litigation and extra-judicial mechanisms. Having said that, China has not completely disregarded the foundations of the UK legal system and has incorporated several legal traditions of the European civil law tradition in addition to widely abandoning their ideological requirements.

How do you feel now that you have this experience abroad? What advice would you give to those thinking of doing something similar?

Nichol: Establishments such as the UK-China Fund and the British Council’s Generation UK Programme will help promote greater bilateral economic cooperation between the two nations. Evidently the UK will look towards building firmer links with China, as the Chinese economy continues on its upward trajectory. Now that I have interned in Shanghai – China’s financial centre – my personal portfolio has become even more unique and shows that I am forward-thinking. The experiences I have gained, both personally and professionally are immeasurable and if truth be told, I could keep writing…What I know is that while I am lucky to have legal experience in the UK, I consider myself even luckier to have acquired legal experience in China. 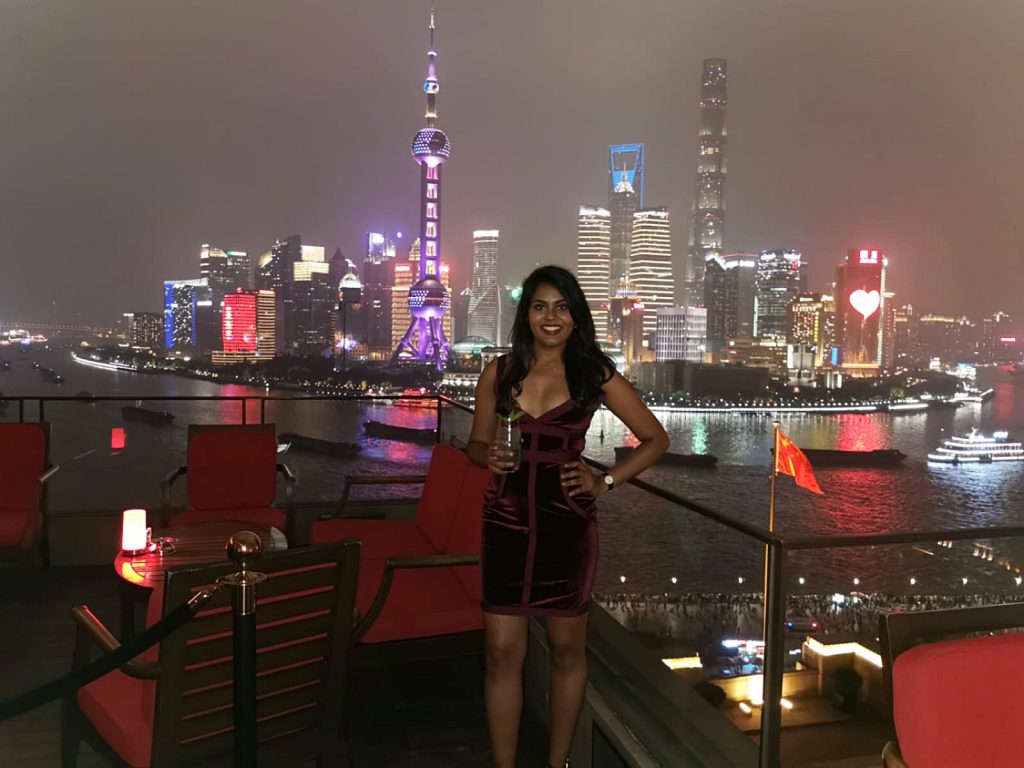 Nichol and the Shanghai skyline.

Kirsten: In light of Brexit and the uncertainty that comes with this major political change, especially for a generation of individuals who are looking to assert themselves professionally, the opportunity to work in a rapidly developing and increasingly influential state such as China should not be underestimated. From camping on the Great Wall, to exploring Tiananmen Square and consuming copious amounts of Peking duck, not only does interning abroad provide the opportunity to experience a new city and culture, it also highlights to future employers your willingness to be flexible, adaptable and able to put yourself in a potentially uncomfortable situation. Whilst any experience is valuable, by interning abroad not only are you exposed to sector specific knowledge, the main advantages include country specific knowledge, cultural agility, global connections and employability. In an ever-increasingly interdependent and interconnected world, the ability to be open to new possibilities outside of your home country is paramount, and thus any opportunity you may be given to explore the working world abroad should be grasped with both hands and maximised to its full potential.

And if all that doesn’t entice you, the travelling opportunities are incredible! From dining in one of the world’s tallest skyscrapers to camping on the Great Wall of China – this experience certainly does nothing but support your case to succeed in the legal world.

If you are interested in learning more about how to obtain a legal internship in China yourself, you can check out CRCC Asia, the world’s leading provider of internships in Asia.