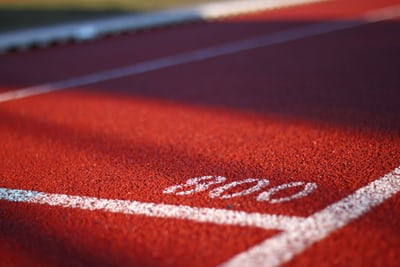 In the ancient Olympic Games, only men were allowed to compete except for equestrian events. After being excluded from the first modern Olympics in 1896, Charlotte Cooper became the first woman to win an Olympic gold medal in the lawn tennis event in 1900. This lack of representation of female sporting prowess led to the creation of the Women’s World Games (1922-1934), with women eventually being allowed to compete in the 1928 Olympics in athletics and gymnastics, as well as lawn tennis and golf.

Since 1928 there has been a clear divide between men and women’s events. This is due to research which found that elite male athletes outperform elite female athletes by around 10% in events that specifically rely on strength and endurance. Nevertheless, the seemingly simple division between men and women and what affects elite athletic performance has been a subject of great debate in sporting world. It has caused the International Association of Athletics Federation (IAAF) to try out different criteria to make rulings on the classification that has created a great deal of scandal, criticism and suffering for many elite athletes across the globe.

In this article, The Student Lawyer takes a closer look at sex testing in sports and the athletes that have challenged the criteria set by the IAAF since introducing testing in 1950.

What is difference of sexual development (DSD)?

What are the IAAF’s current rules on sex classifications?

Currently the IAAF’s rules base sex classification is based on the level of testosterone an athlete produces. This is measured in nanomoles per litre (nmol/L). Below is the normal range for males and females:

In 1966 the IAAF introduced nude parades where they would examine an athlete’s genitalia to determine whether they were male or female. It at the IAAF’s discretion to decide if an athlete would be tested.

Ewa Klobukowska, the Polish sprinter who had a gold and a bronze from the 1964 Olympics in female events, passed the nude parade in 1966. The following year however, she was to become a landmark case when she failed the IAAF’s new chromosome testing criterion.

Following the ruling by the IAAF that the intersex athlete Ewa Klobukowska was banned from competing and was stripped of her three world records, under the new system of chromosome testing.

After a chromosome test in 1985, the Spanish hurdler Maria José Martínez-Patiño was disqualified from the Spanish national team, as it became clear that she fell into the intersex category. However, biologists who specialise in genetics later proved that testosterone did not give Martínez-Patiño any athletic advantage, because her condition made her insensitive to the hormone’s effects. This case led the IAAF to rethink how the determined gender. By 2011, they had the solution: measuring testosterone levels.

Why would the IAAF pick testosterone as a deciding factor of athletic performance? It is true that whilst only 0.00005% of the population is intersex, 8.5% of championship medals have been won by intersex women in middle-distance races over the last 25 years, according to one estimate. Increased levels of testosterone have been proven to improve aerobic endurance, allow an athlete to recover faster from exercise and increase muscular power. Athletes who have received bans for doping use anabolic steroids that boost the amount of testosterone in the user’s body. They are commonly known as “performance-enhancing” drugs.

Some however criticise the IAAF’s focus on testosterone levels arguing that other biological factors such as an athlete’s heart size or VO2 (the amount of oxygen that one can use during intense exercise), or environmental factors such as the facilities and equipment available to train with, coaching and an athlete’s diet.

These criticisms were caused by the landmark case Dutee Chand v. Athletics Federation of India (AFI) & The International Association of Athletics Federations (IAAF), where the 19-year-old Indian 100 metre sprinter who had unusually high levels of testosterone successfully appealed the Athletic Federation of India (AFI) and the IAAF’s 2014 ruling that she could not compete as a female athlete. In 2015, the Court of Arbitration for Sport (CAS) ruled in favour of Chand on the grounds that there was not sufficient evidence that testosterone increased female athletic performance.

As a result, the IAAF was forced to consider new regulation. Following a suspension of the rules between 2015 and 2017, the IAAF decided that they would lower the testosterone threshold for middle-distance events. Even before the new regulations had come into force, this was challenged by the South African athlete Caster Semenya, who knew that she would now face disqualification from competing in her specialist middle-distance events.

Caster Semenya’s case and why it matters

Caster Semenya established her presence in world athletics when she won gold in the 800 metres in 2009 at the World Championships in Berlin at the age of 18. Yet this sudden success, which saw Semenya take 25 seconds and 8 seconds off her 1500 metres and 800 metres times respectively, led to questioning by the IAAF about possible drug use and the athlete’s gender. The IAAF’s investigations were heavily criticised as many argue that Semenya’s privacy was breached due to leaks of personal information. South African commentators, politicians and activists even considered the investigations racist. The investigations meant that Semenya had to withdraw from athletics until July 2010, when she was allowed to return after she had hormone treatment.

Semenya then went on to compete at both the London (2012) and the Rio de Janeiro (2016) Olympics winning gold in both the 800 metres events. Between 2015 and 2018 she was allowed to compete without hormone treatment. But, following the decision of the CAS regarding Chand’s challenge to the assumption that more testosterone means an improved athletic performance, Semenya faced the threat of being disqualified from her specialist events.

Under new DSD regulations an athlete must satisfy these 3 categories to be allowed to compete at an international level:

Semenya argued to the CAS in 2019 that the new regulations:

On 1 May 2019 however, the CAS rejected Semenya’s appeal. In response to Semenya’s arguments, the CAS stated:

Despite a temporary reprieve on 3rdJune 2019 with an appeal to the Federal Supreme Court of Switzerland, on 30thJuly 2019 the Swiss Federal Supreme Court maintained the CAS’s decision. Semenya has been forced to join a South African women’s football club whilst waiting to see if her further appeals will be successful. Semenya has remained admirably strong through, with one of her few public statements expressing he commitment to maintain her identity: “I am Mokgadi Caster Semenya. I am a woman and I am fast.” Yet she has endured great personal trouble and uncertainty during these legal challenges which she has said “destroyed” and “crucified” her “mentally and physically”.

Caster Semenya’s case brings up fundamental questions about the “imperfect alignment of nature, law and identity”. Her case has rightly angered many. It undermines the simplicity of understanding gender and sex as binary (male or female) and the need for sport to consider the biological reality that it exists on a spectrum. The CAS’s decision has also meant opening “the wounds of apartheid” and allowing the IAAF to justify a level of discrimination. It is clear that there is no quick and simple answer to them problem.

Moreover, there are many questions surrounding the scientific basis to the link between testosterone and athletic performance. This becomes even more difficult with regards to other sports, where athletic performance is more difficult to quantify. For wrestlers and rugby players, other physical qualities contribute to improved performance that are not necessarily linked to testosterone. In addition to the lack of clarity around the link between testosterone and sporting performance, the ethics of prescribing (potentially damaging) drugs to alter a person’s naturally occurring hormones without there being a clear medical necessity is questionable. When asked if she would undergo hormone treatment again, Semenya responded “No, no freaking way”, adding that she felt she had been “used”.

Finally, it is clear that IAAF must improve its protection of athletes’ privacy when investigations are ongoing. Caster Semenya, Dutee Chand and other athletes have suffered greatly during such investigations. The issue may be divisive, but better protection must be afforded to athletes by the IAAF in future cases.